Okay. This is an entry one of a new format I’m trying: Design diaries.

The idea of design diaries is to share my process of creating games as I learn it the hard way. That means I try to minimize the hindsight bias of looking back at the messy beginnigs and thinking, “Well of course I did this completely illogical change. I knew it’s going to out eventually.”

I don’t know shit guys. I’m making it up as I go, and I want these diaries to capture the creative process with all it’s beauty and messiness and uncertainty.

Also, writing public reflections helps me organize my thoughts and, if I’m lucky, and this is readable, I might even get some feedback on my games from you.

So let’s give this format a try.

This first entry covers almost 3 weeks of time because I was procrastinating this hard. In the future, I’d like to do this weekly or even more often. We’ll see what works best.

Before we begin, I should warn you: this stuff is primarily meant for myself, other game designers, and people who enjoy reading about nuances in the process of creating games.

Also, I don’t edit these very much because the rawness is a feature. Plus I want to keep this as effortless as possible because I intent spend most of my time design games, not writing about designing them.

Okay. Let’s start with some info about what games am I working on and why.

I’m focusing on board games over video games (for now)#

I want to design games and I don’t care that much if they are digital or physical. Both platforms have their strenghts and weaknesses and I want to have the option to choose whichever suits best every project.

That said, I don’t have the coding skills necessary to develop video games in game-making software like Godot or Game Maker. I will work on those soon, but I don’t have the patience to start there.

That’s why I focus on board games first.

Another thing you should probably know about me is that I’m a systems-first designer. That means I’m usually more interested in the mechanics and systems in a game than the story or the art.

I adore when all of those pieces work well together, but if I had to pick a game that has only one of those things done well, I’d choose to play an ugly game without with a shitty or no story that has a brilliant system of gameplay mechanics.

We make games we want to play, so it makes sense that I enjoy making games I enjoy playing. Thinking about and solving systems is what I gravitate towards in game-making.

Now, let’s look at the games I worked on.

I prototyped three games, two of them are in a dead end#

The first game I started prototyping is Candy Factory. It’s a simple card game with some dice rolling, and it’s building a manufacturing line to make the best candy in the world.

The intention behind the game is to create an experience for the player that feels like running a manufacture. You want to be efficient and enjoy looking at your well-oiled machine that pumps out tones of candy every round. While at the same time, you have to solve crises on the spot, adapt, and do your best with what you currently have.

I made 3 prototypes over the last 3 weeks, but none of them works yet.

The first prototype used a single type of candy which also served as money to buy cards. The cards had a price in candy, a function you could activate with dice, and a victory point value which increased your total of points at the end of the game.

In the second prototype I added a second type of candy and removed prices and point values from cards to make it more about the production. The rest of the mechanics remained almost the same. But it still didn’t work. It felt mostly like you had to maximize your production instead of making any interesting decisions. I didn’t like it. 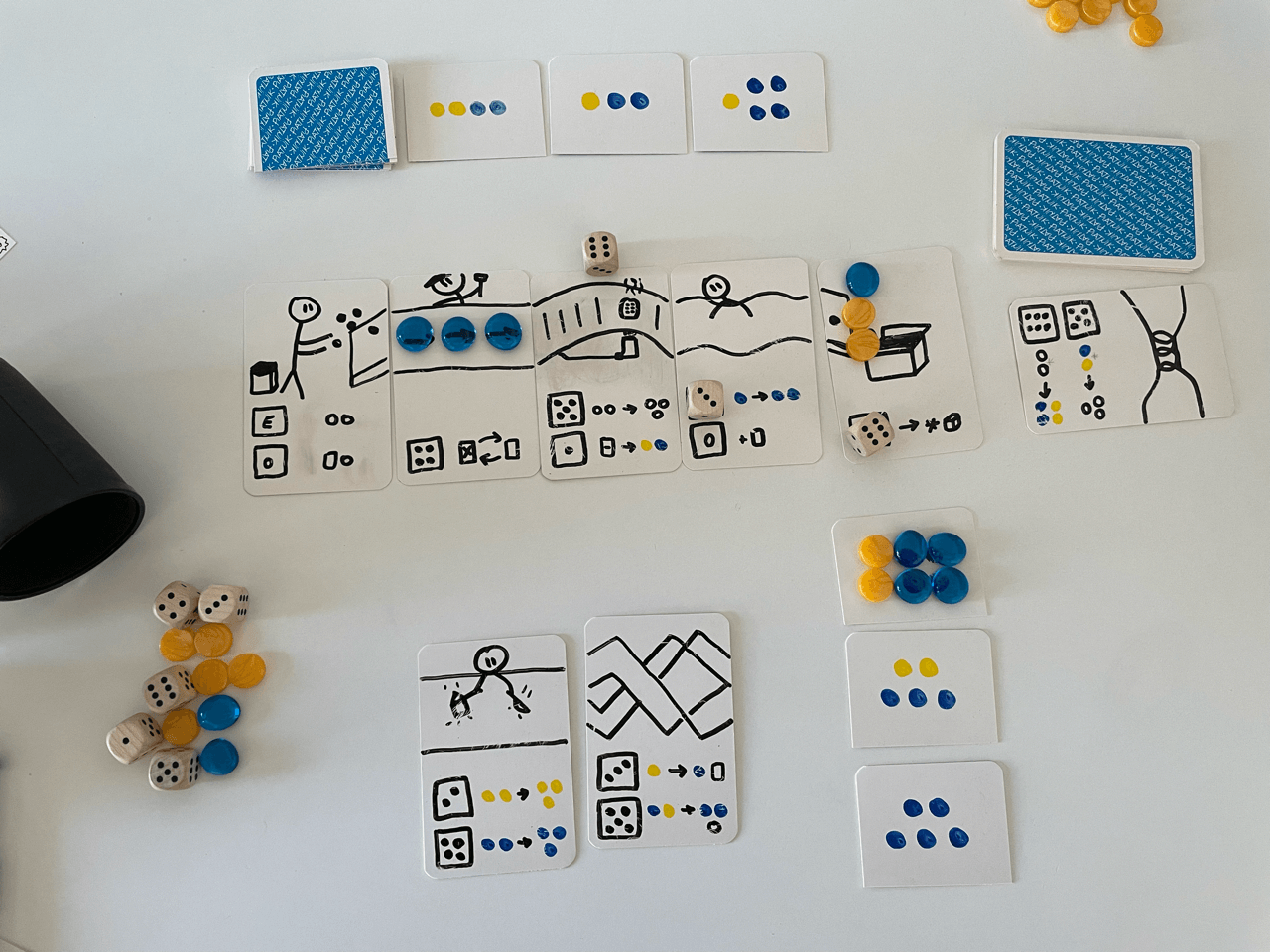 In the third prototype, I introduced chaos to the equation. I added 3 more types of candy in different tiers. So you needed some of the lower tiers of candy to create the higher tiers. I prototyped like 10 cards and tested the gameplay, but it still didn’t land the feeling I’m after in the game. It’s too complicated and not much fun. 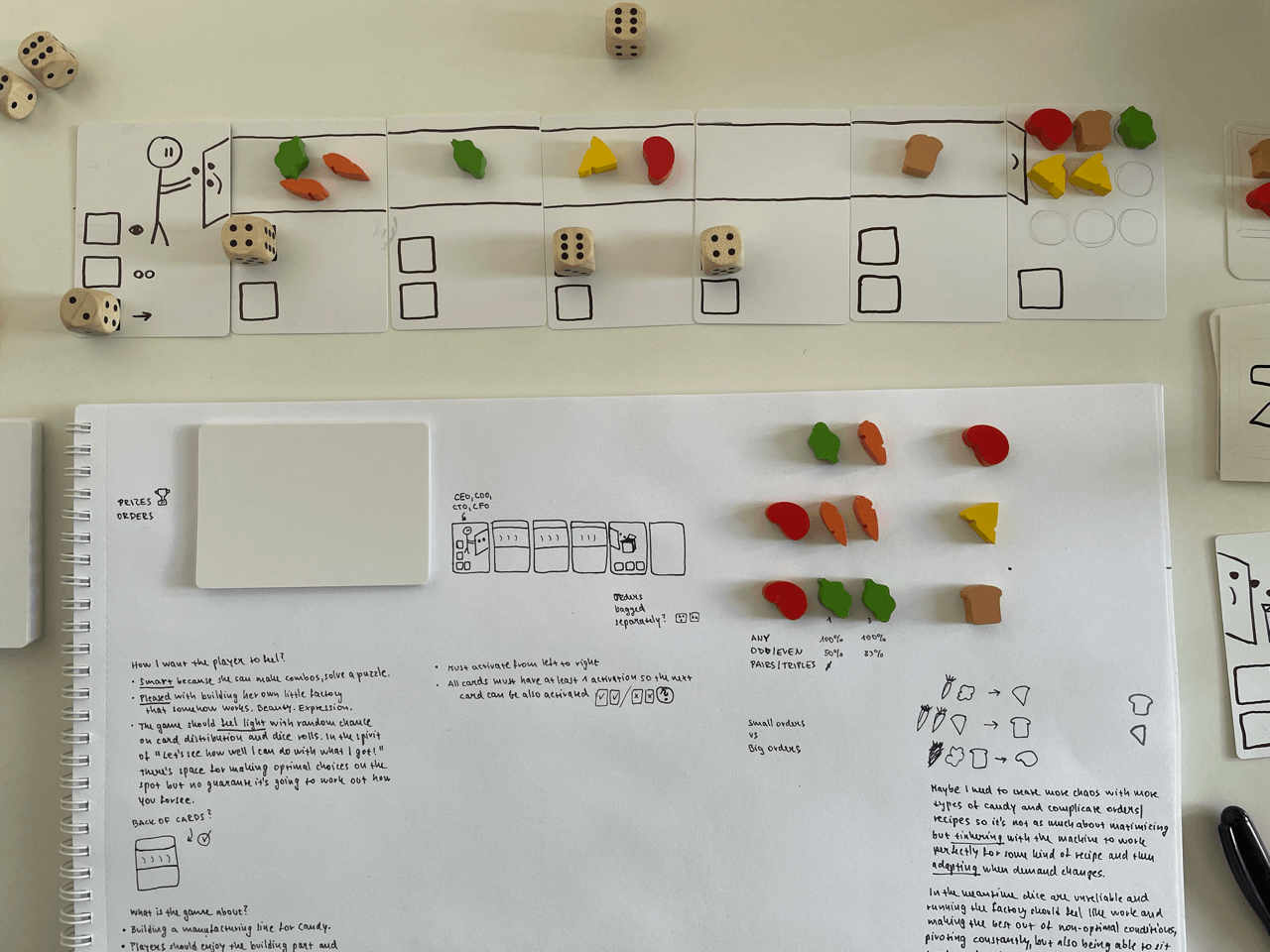 So right now, I don’t know where to go next with this game. The design is not developed enough to be tested with players yet. I probably need to go back to the basics here, simplify, and try to find what’s the core enjoyable mechanic to build this game around. Or I’ll ditch it and work on something else. That works too.

Speaking of something else…

This game protototype was a brief interlude between working on other prototypes, but it’s worth mentioning anyway for authenticity reasons. Otherwise I could fall into the habit of only mentioning the few things that kinda work and leaving the 80% that doesn’t unmentioned. Not on my watch.

There is an old copy of Stone Age in the cabbot of the house we stayed at about a month ago with a group of friends over the weekend. And somebody always wants to play it. I kinda want to play it. Even though it’s a pretty simple game you can “solve” after playing it a couple of times, which we did.

However, there is something deeply satisfying about rolling a bunch of dice in a cup over and over again. It’s fun to send less workers for food than math and safety dictates to make sure you have enough to feed your clan. You shake the dice, yell something like “C’mon, daddy needs some sixes baby!” and you smash the cup onto the table. After a second of hesitation, you reveal the dice, and the moment before you know whether it worked or not is thrilling. What follows is a big cheer of joy or curses on your greed and the fact that members of your clan will eat your precious stone for dinner.

This is where the game of Stone Age resides. This makes it satisfying to play, even if you’ve solved the rest. You can just roll dice again and again, and enjoy the simple pleasure of suspense before revealing the dice and how it shifts into cheers or screams.

It’s the thrill of gambling but without the risk of loosing your house in the process.

So, the idea was to build a dice game around this mechanic: rolling a bunch of dice with the same moment of suspense and payoff. That’s the core of the first prototype.

Long story short: I couldn’t make it work. The dice rolling is okay, but without any context of what’s at stakes if you fail or succeed, it’s not satisfying enough. I tried designing other mechanics for the game, but then I got stuck and returned to Candy Factory again.

The premise of the game is “Who has the banana card in their hand at the end of the game, wins.”

I want it to be very simple, partially because I really really want to have some prototype to bring to the Monday’s playtesting meetup that happens every other week in a local game pub. (4 days from now)

So I started designing some cards and ended up with a 21 card deck of different fruits. 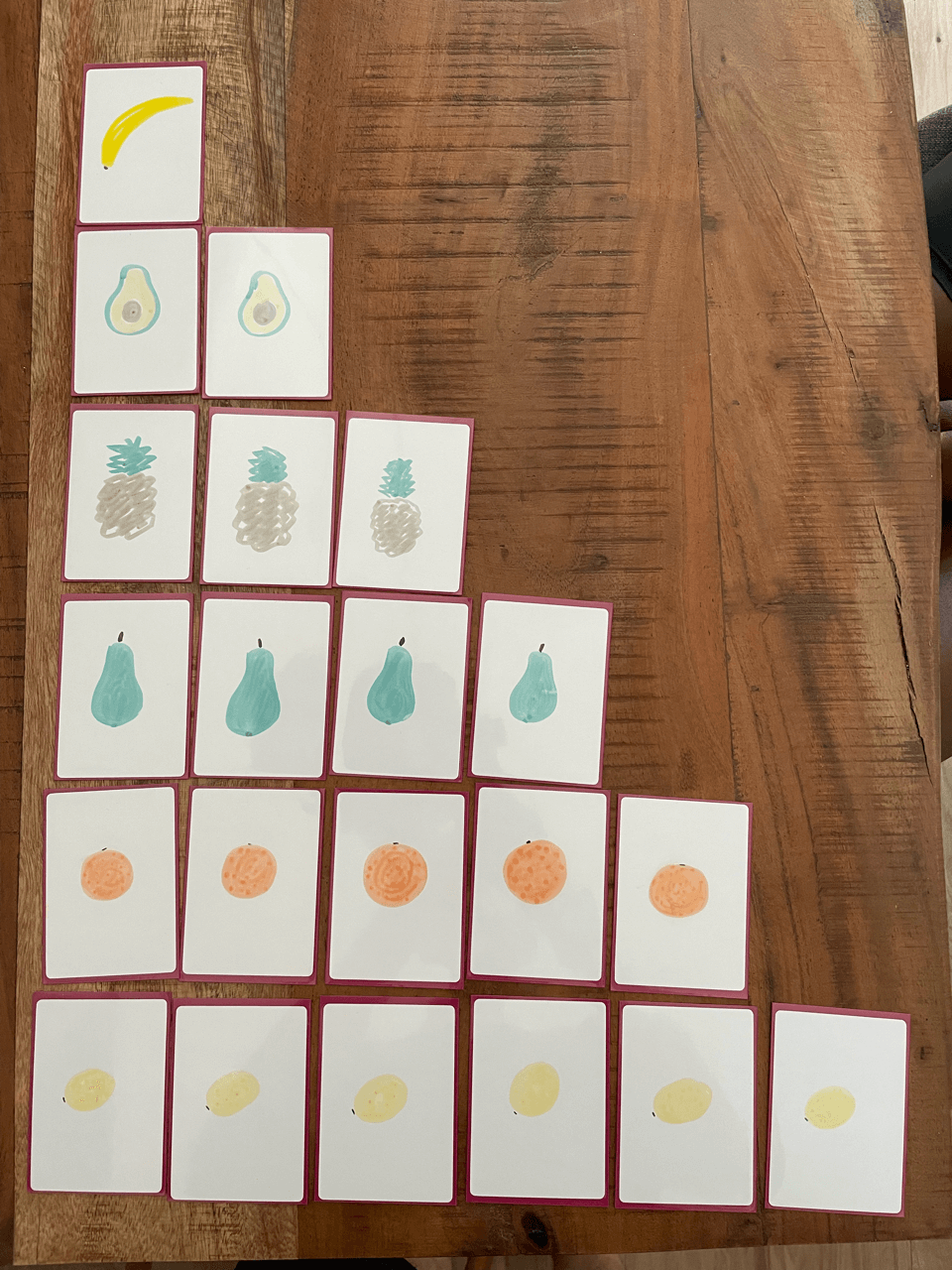 It’s a very simple game. There’s a deck of cards in the middle of the table and players go clockwise to take turns. 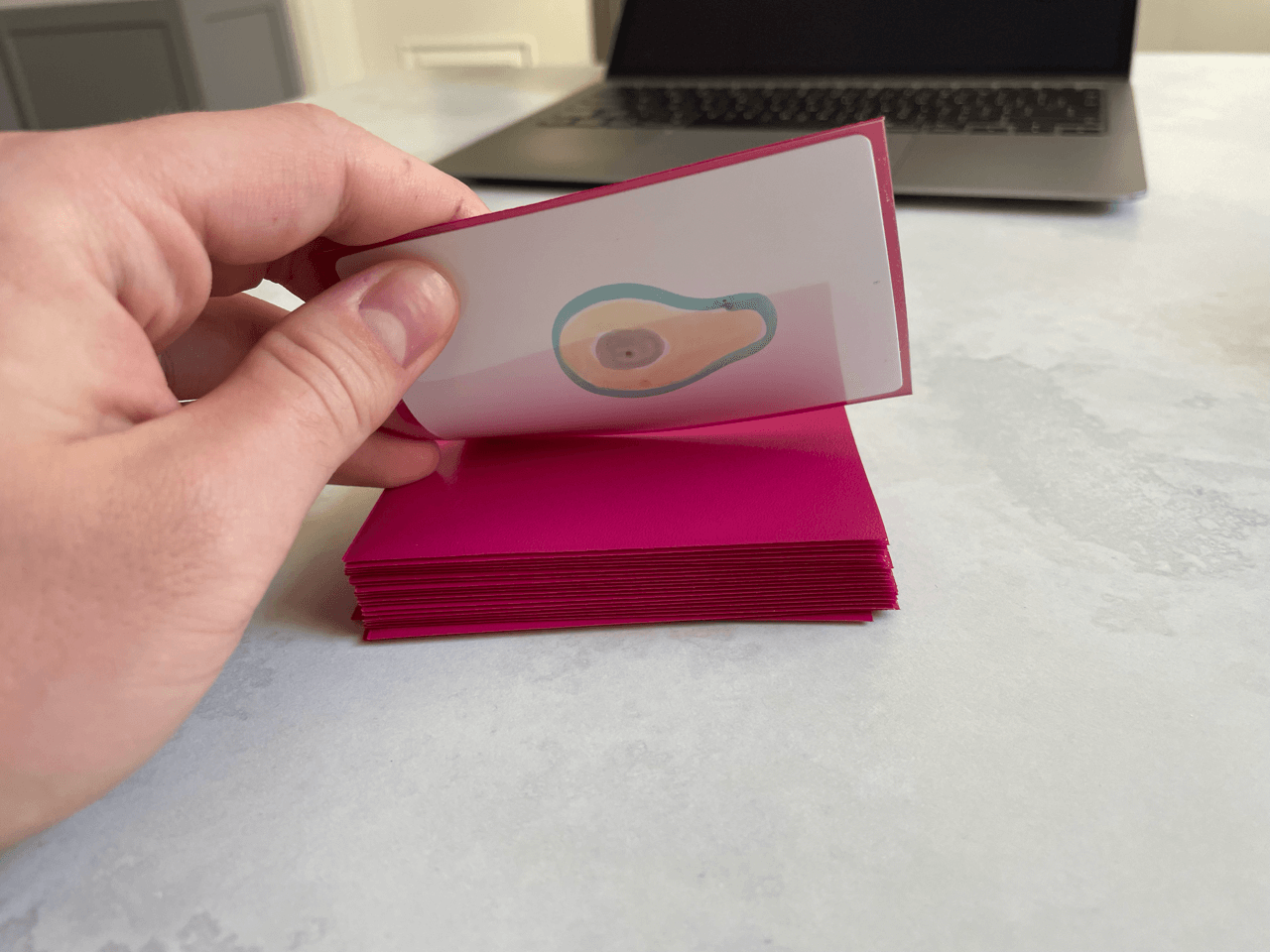 Different fruit cards have different effects like taking cards from others, drawing additional cards, or switching cards between players.

The game ends when the deck runs out, and whoever has the banana in hand, wins. 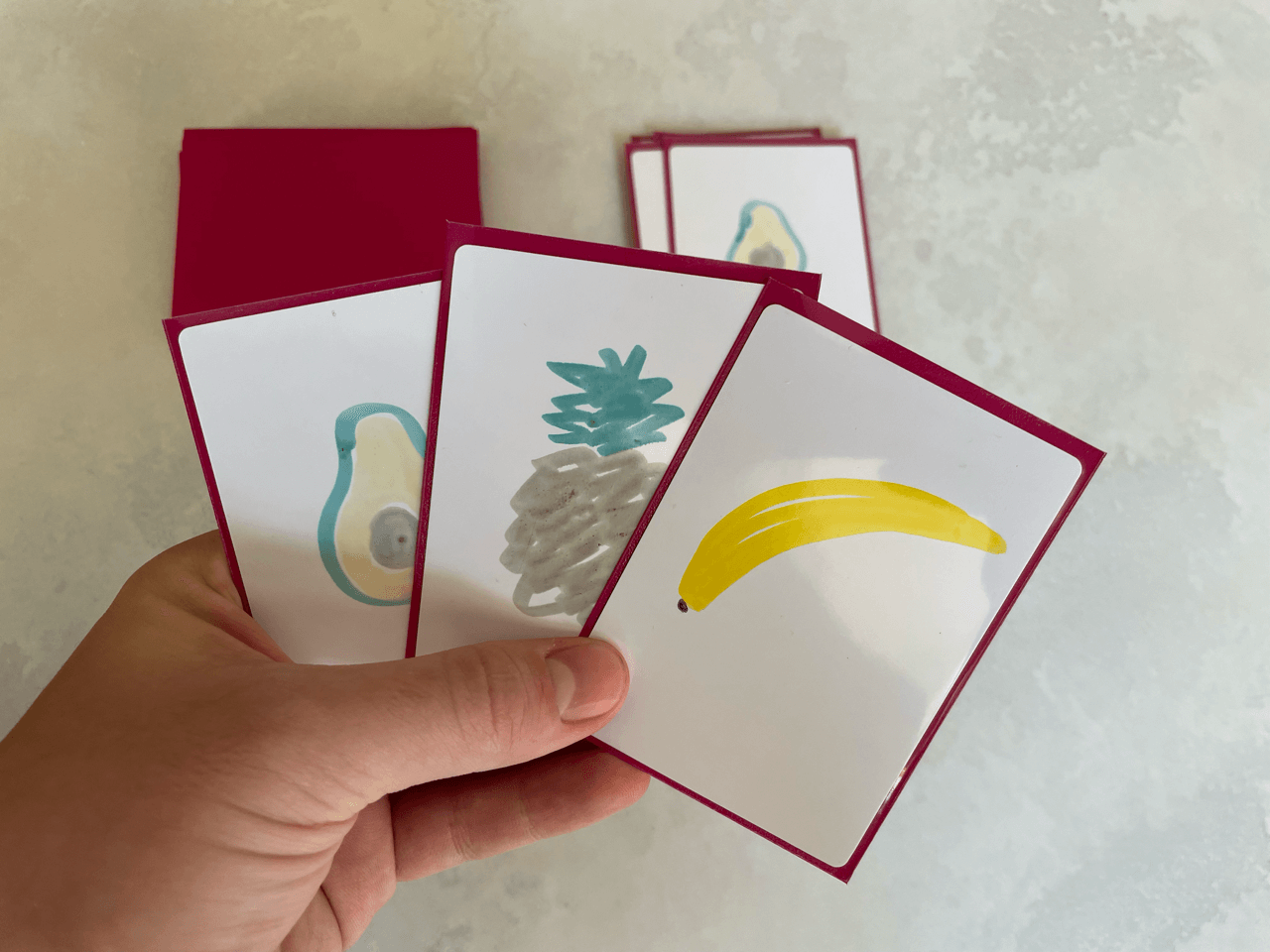 We played it several times with Lin today, and we actually had fun with it. It’s quite good. Or we just like stupid games about bananas. Or both.

Anyway, I’m going to test it with more than 2 players over the weekend, and then bring it for playtesting on Monday. I’m looking forward to that. I’ve never had a group of designers playtest my game before. I’m so nervous. :D

Well. This was kind of a mess.

Sorry, I can’t edit this much because otherwise I won’t do it often. When public reflections become too much work I don’t do them, and I want to do this.

Writing this is helpful to me even if nobody reads this.

But if you by any chance did read this, let me know if you have any thoughts, ideas, or questions. I’m here to talk to players and designers, and share and learn as much as I can. So, please, write me an email, or tweet at me.

That’s it for the first entry.

Another one in a week. Question mark.

Have a fun day.